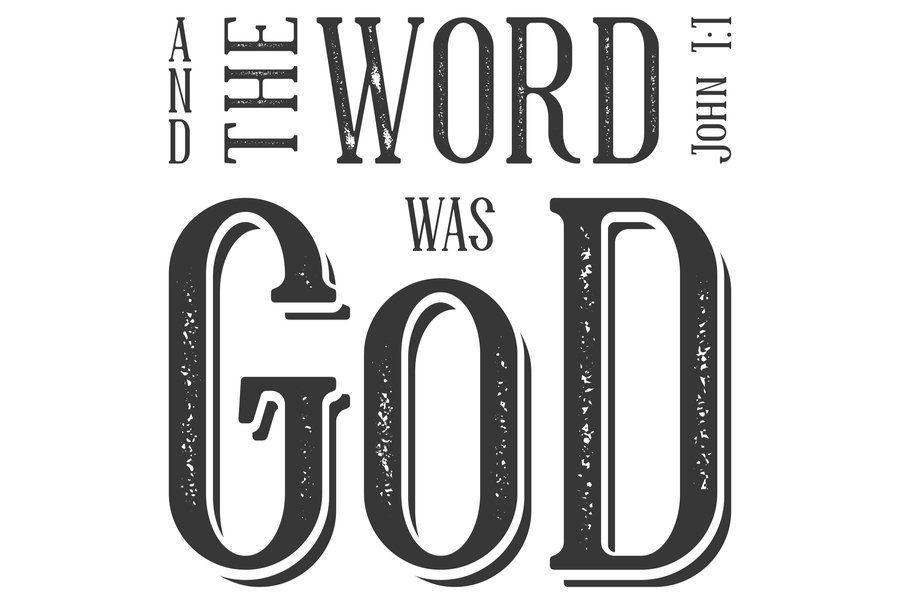 Two years ago, my family started a new tradition, memorizing scripture together at Christmas.  I wanted to help keep our focus on the reason for Christmas.   There was an incentive attached if they quoted the scripture. It was interesting to observe each one say the verses. I was amazed at their enthusiasm and commitment. Last year, the verse was John 1:1, “In the beginning was the Word, and the Word was with God, and the Word was God.”This year, the verse was John 1:14,“And the Word became flesh and dwelt among us, and we beheld His glory, the glory as of the only begotten of the Father, full of grace and truth” (NKJV).

To get the full picture of John 1:1, it’s helpful to read a little further. Verses 2-4 explain that “He was in the beginning with God.  All things were made through Him, and without Him nothing was made that was made.  In Him was life, and the life was the light of men” (NKJV).   As I studied these verses, the fact that Jesus is called “the Word” gave such rich meaning to the celebration of Christmas. Not the secular version of Christmas, of course, but the true one, focused on the birth of Christ–who He is and why He came to earth. So, I’ve considered: why was Jesus Christ called “the Word”?  As I ponder that phrase, what comes to mind is communication, God speaking to us. David Jeremiah points out in his study Bible notation that “by calling Jesus the Word, John emphasizes that Jesus is the revelation of God.” A complementary passage below from the book of Hebrews further explains this revelation of God the Son, the “Word” who became human and walked among us.

In the past God spoke to our ancestors through the prophets at many times and in various ways, but in these last days he has spoken to us by his Son, whom he appointed heir of all things, and through whom also he made the universe. The Son is the radiance of God’s glory and the exact representation of his being, sustaining all things by his powerful word. After he had provided purification for sins, he sat down at the right hand of the Majesty in heaven (Hebrews 1:1-3 NIV).

God has spoken to us by, in, and through His Son! The Son reveals God’s glory and is exactly like His Father. John tells in 14:9, “No one has ever seen God, but the one and only Son, who is Himself God and is at the Father’s side, has made Him known” (NIV).

All three writers converge on the same great truths: Christ is the image of God, the exact likeness of God the Father; Father and Son have been together from the beginning; Jesus is as a firstborn son, supreme, in the highest position with God. The bottom line for us is this: we are able to see God in all His glory through Jesus Christ. If we want to know the attributes of God, we can look at Jesus. If we want to see God and His glory, we can study God’s Word the Bible, and look at the life of Jesus, the Word. As Samuel D. Gordon, author and lecturer, so beautifully put it, “Jesus is God spelling Himself out in language that man can understand.”

Ask yourself, do I know who Jesus is? Jesus patiently clarifies who He is to his disciples as He tells of His upcoming crucifixion.

Thomas said to him, “Lord, we do not know where you are going, and how can we know the way?” Jesus said to him, “I am the way, the truth, and the life. No one comes to the Father except through me. If you had known me, you would have known My Father also; and from now on you know Him and have seen Him.” Philip said to Him, “Lord, show us the Father, and it is sufficient for us.” Jesus said to him, “Have I been with you so long, and yet you have not known Me, Philip? He who has seen me has seen the Father; so how can you say, ‘Show us the Father’? Do you not believe that I am in the Father, and the Father in Me? The words that I speak to you I do not speak on my own authority; but the Father who dwells in me does the works. Believe me that I am in the Father and the Father is in me (John 14: 5-11 NKJV).

If you examine your heart and look intently into God’s Word, you will resonate with Thomas’s words when he realized Jesus has truly risen from the dead, “And Thomas answered and said unto him, ‘My Lord and my God’” (John 20:28 NKJV).

Holy Father, You are the greatest communicator. Thank You for revealing Your grace and truth as Jesus Christ, the Word, walked this earth. We praise You for showing us Your majesty, power, and glory. Thank You for loving the world and for sending Your Son, the Lamb of God, our Savior, to die for our sins. Give me the wisdom to follow Christ’s perfect example. Help me to be intentional in sharing Your grace and mercy every day. Guide me in all Your truth.  In Jesus’ Holy Name, Amen.

Jesus said, And this is eternal life, that they may know You, the only true God, and Jesus Christ whom You have sent (John 17:3, NKJV).