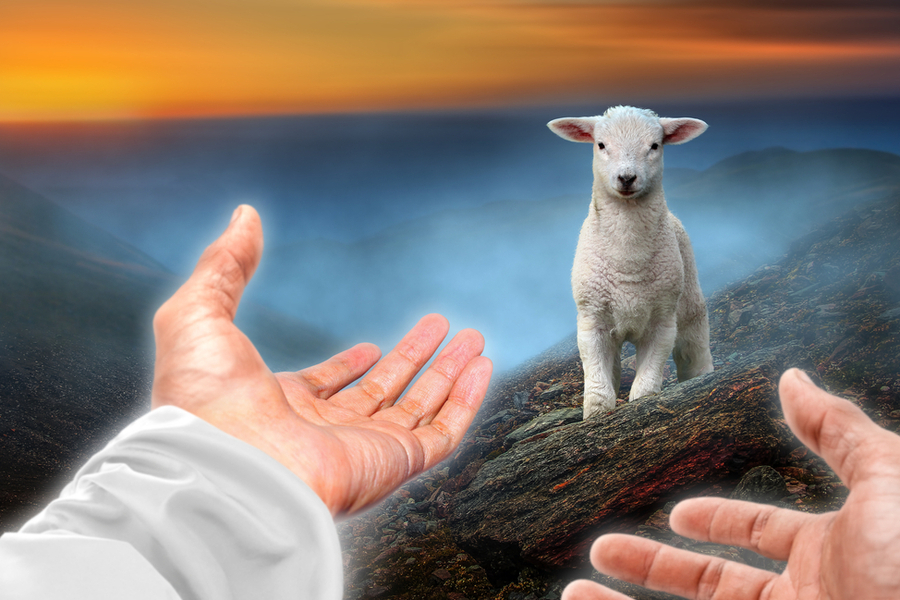 One morning, very early on a cold winter day, Ken and I climbed up in the deer stand. Even though it was drizzling rain we were committed to finding the great “muy grande” deer that morning. We settled in and watched as the sun rose in the east. This was a miserable morning, and I was glad we were out of the rain. Not long after daylight, in the distance, we heard a sound that was just like a baby crying—understandably, a very distressing noise. As it became near-constant, I asked Ken what it was, and he explained that we were hearing a lamb who had been separated from its mother. Well, to Ken’s dismay, the lamb’s bleats became even louder, and the cold rain continued. Finally, it was more than I could stand; I was determined we had to go find that lamb. Climbing down from the deer stand, we proceeded to follow the sound. It wasn’t long before we found that little, tiny lamb, soaked, alone, and sad. I tried to go up to it, but I had no cooperation from the lamb. Then Ken walked up and picked it up and put it in the truck. I remember thinking, why is this lamb resisting when we are trying to help him? He was like so many of us who refuse to accept being saved when salvation is offered. At that point, we drove around till we found the herd of sheep and returned the baby to its mother. As I recall this story, it reminds me of the many references in the Bible to the caring and compassionate shepherd who seeks out and cares for the lost lamb. My favorite of them all is the 23rd Psalm, written by David, who knew well the responsibilities of a shepherd and the vulnerability of the lambs he had cared for. David loved and trusted the Lord, his shepherd.

“The Lord is my shepherd; I shall not want. He makes me to lie down in green pastures; He leads me beside the still waters.  He restores my soul; He leads me in the paths of righteousness For His name’s sake. Yea, though I walk through the valley of the shadow of death, I will fear no evil; For You are with me; Your rod and Your staff, they comfort me. You prepare a table before me in the presence of my enemies; You anoint my head with oil; My cup runs over.”

As you read this Psalm, you so readily see the heart of the most compassionate, caring shepherd of all time, the Lord. He is loving and attentive to us no matter our needs. You also see a heavenly Father who knows what we need before we do. Jesus further illustrates this in the story of the lost sheep in Luke 15:1-7. He illustrates His compassionate heart for the lost by pursuing the lost sheep, a sinner who needs His grace and mercy, with determination and devotion.

Then all the tax collectors and the sinners drew near to Him to hear Him. And the Pharisees and scribes complained, saying, “This Man (Jesus) receives sinners and eats with them.” So, He spoke this parable to them, saying: “What man of you, having a hundred sheep, if he loses one of them, does not leave the ninety-nine in the wilderness, and go after the one which is lost until he finds it?  And when he has found it, he lays it on his shoulders, rejoicing. And when he comes home, he calls together his friends and neighbors, saying to them, ‘Rejoice with me, for I have found my sheep which was lost!’  I say to you that likewise there will be more joy in heaven over one sinner who repents than over ninety-nine just persons who need no repentance.”

Jesus further illustrates His compassion for the lost with the parable of the lost coin and the lost son, the prodigal son, in Luke 15. Each one is a window into what compassion looks like.  To have compassion means to empathize with someone who is suffering and to feel compelled to reduce the suffering. The greatest demonstration of genuine love and compassion of God is found in John 3:16-18.

Compassion.com/child-development/meaning-of-compassion, explains, “Mercy is the compassionate treatment of those in distress. Mercy is the fruit of compassion. It’s the gift given to the suffering by those living out their compassion. In the New Testament, Jesus is often moved to mercy through compassion. Jesus’ compassion prompts Him to act, and He mercifully loves, heals, and rescues. Jesus’ very presence in the world is the ultimate act of compassion. We did not deserve His sacrifice, but because of God’s great love, we were treated with mercy and are called to live lives of compassion and mercy. ‘Be kind and compassionate to one another, forgiving each other, just as in Christ God forgave you’” (Ephesians 4:32, NIV).

I am encouraged when I consider all the many demonstrations of compassion of the Lord Jesus Christ. He is faithful, as we are reminded in Lamentations 3:22-23, “Through the Lord’s mercies we are not consumed, because His compassions fail not. They are new every morning: great is Your faithfulness.”

I praise you, Lord God, that you have revealed yourself to us through the life and work of your Son, Jesus Christ.  “For God, who said, ‘Let light shine out of darkness,’ made his light shine in our hearts to give us the light of the knowledge of God’s glory displayed in the face of Christ” (2 Corinthians 4:6). Help me to live a life of compassion and mercy as Christ has shown us. Open my eyes to the needs of others and show me how I can help them. Bring to my mind the question, “How can I help you?”, as I see others in need.

I pray this in Your Holy Name, Lord Jesus.

John 1:18 “No one has ever seen God, but the one and only Son, who is himself God and is in closest relationship with the Father, has made him known. “

What does it mean to be strong and courageous?
His Presence